CROSS PATTERNS: PATHS TO BE ABLE TO RETURN

Interactive and multimedia installation inspired by the polysemy of the sophisticated geometric patterns called Kené, created by the Shipibo-Konibo, an indigenous group from the Peruvian Amazon. Cross Patterns deals with and questions an invented tradition created among the Shipibo-Konibo in the early 1980s.

For centuries, the Shipibo-Konibo have had contact with missionaries, explorers and researchers, many of whom combined reality with fictional narratives or creative imagination when referring to them, mixing storytelling with direct observation, the real with the wonderful. The reason for their popularity is a combination of the geographic accessibility of the area which they inhabit, their use of ayawaska when practicing “shamanism”, and their Kené designs.

In the early 1980’s, a German anthropologist outlined the idea that the intricate design art of the Shipibo-Konibo may once have been a codified system of meaning. She assumed that common Shipibo-Konibo had lost their traditions over the centuries and were therefore no longer initiated into the “design messages”. Only their “shamans” preserved this knowledge and could sing the Kené designs as if the patterns embroidered or painted on fiber surfaces were “soundlines”. She proposed that the songs of the Shipibo–Konibo “could be heard in a visual way, and the geometric designs may be seen acoustically”.

The idea of designs that could be sung as if they were coded music, was not part of the Shipibo-Conibo’s life before been introduced by anthropologists. The “reality” created with respect to these singable designs on textiles is an imperfect reality, a “truth” about a “tradition” that is, in fact, a fiction, created to support certain expectations and to justify a discourse. The popularity of this idea led the Shipibos themselves made up ways of attributing musical meaning to certain designs. Nowadays, researchers, as well as tourists, can observe and record many occurrences of this “traditional” practice.

Cross Patterns was a tactile and poetic way of approaching this invented tradition, by following one of the most observable instances of history-in-the-making, where fiction started to replace reality — and actually became reality.

The installation requires synchronization between mechanical and digital media. By following the songs of the Shipibo as ‘score’, a machine draws patterns on fiber thanks to a programmed and motorized mechanism. Thanks to a microphone, the viewer can interact with the sound and change the course of the drawing. Later, the same patterns created, modified or not, are read it again as music. 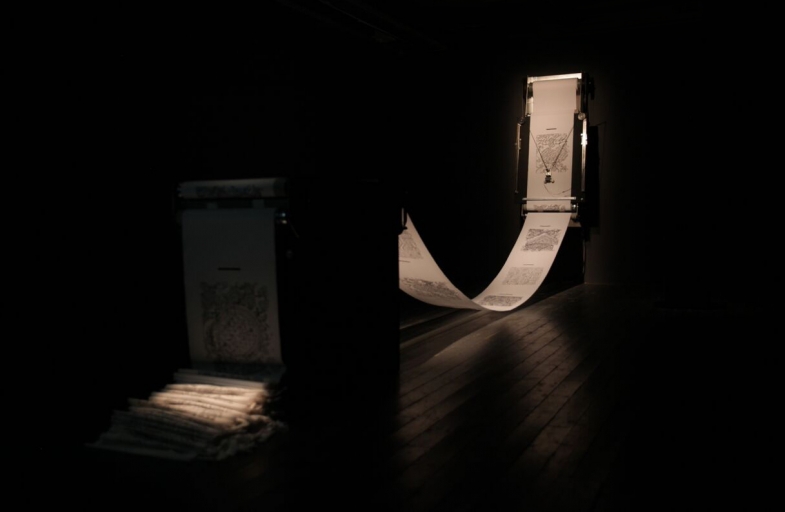 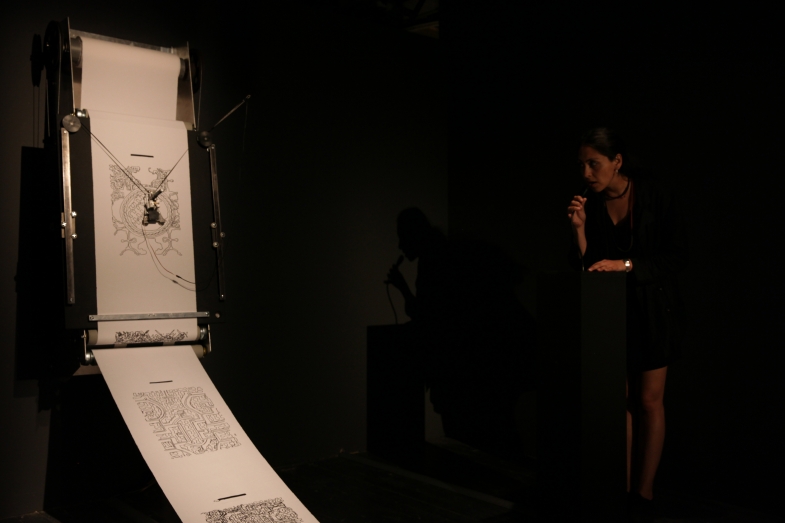 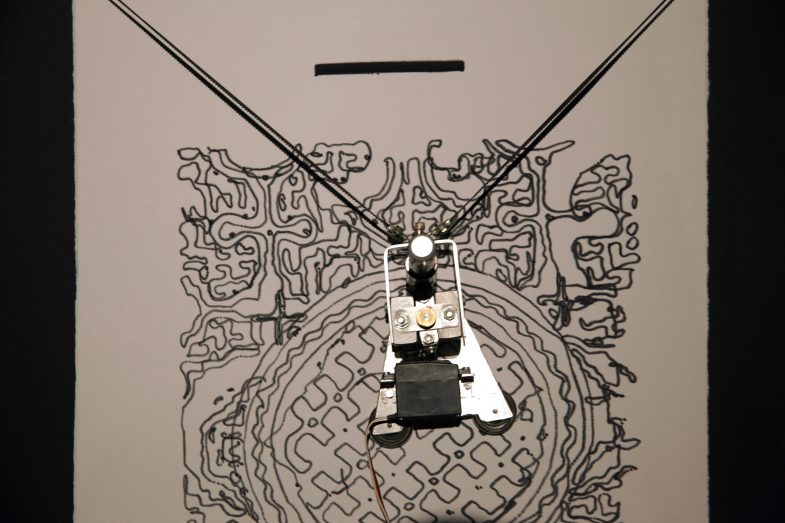 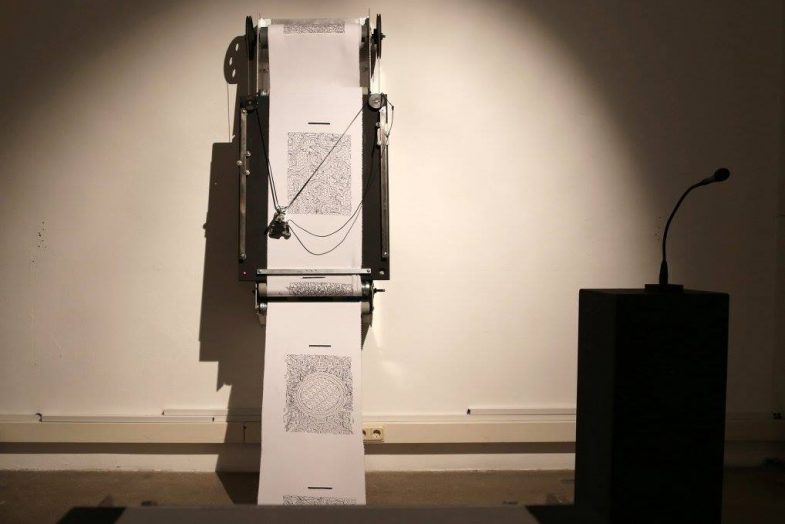 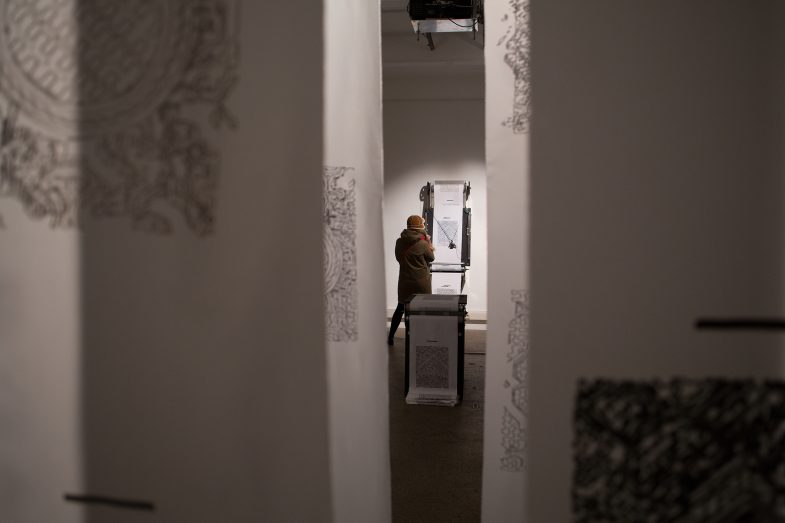 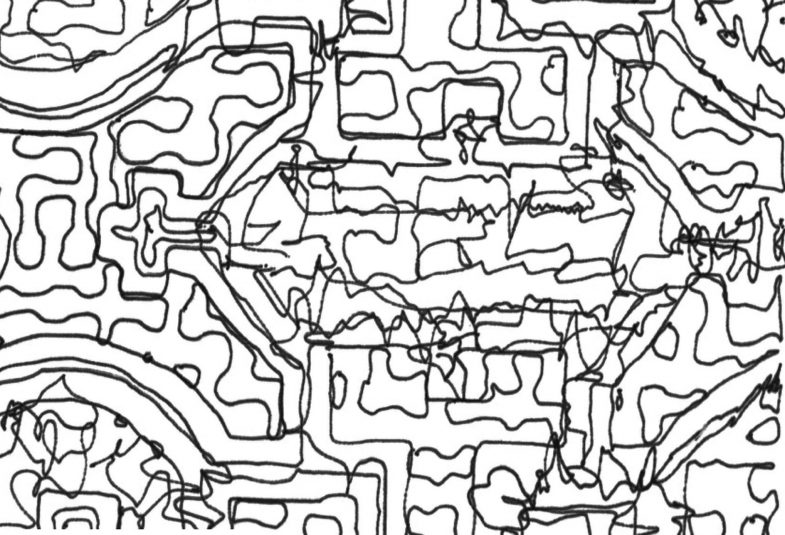 In 2017, it’s presence in “Personal Structures- Open Borders” exhibition in Venice, was possible thanks to the kind support of DIRAC (Chile), FONDART (Chile), Wien Kultur (Austria), the sponsorship of ARTEL (Chile) and CO Galería (Chile).